One of the enduring myths of our current nutrition culture is that Americans don’t follow recommendations–have never followed them–because if we had, this obesity thing wouldn’t have happened. According to the 2010 Dietary Guidelines Advisory Committee Report, “average American food patterns currently bear little resemblance to the diet recommended in the 2005 Dietary Guidelines for Americans.”

As proof, the following figure is provided: 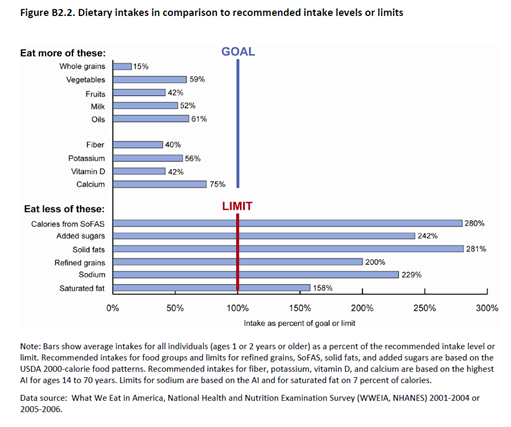 It seems pretty obvious that Americans are woefully off-base when it comes to eating anything close to what the USDA and HHS have been recommending for the past thirty years. I would bet my RD certification that this figure will be shown in PowerPoints across the land to demonstrate—to the accompaniment of much hand-wringing—how we must “make the healthy choice the easy choice” for those poor, dumb Americans who will otherwise just eat themselves into obesity and ruin airplane trips for the rest of us.

1) The figure shows that we eat too many calories from SoFAS. But this concept was not part of the Guidelines until the 2010 Dietary Report, the report that contains this figure. In other words, Americans are being held to standards that hadn’t even been created yet.

3) The standards for whole grain consumption given in the Guidelines that the public would be familiar with when the data were collected were pretty vague: “Choose a variety of grains daily, especially whole grains” (from the 2000 Dietary Guidelines). I don’t know how this translates into an absolute amount of whole grains that Americans don’t consume.

5) In the fine print, it says that the sodium cut-off is based on the recommended Adequate Intake (AI) amount. The AI amount is a “goal for adequate intake,” and, as such, is more of a floor than a ceiling. The AI amount is currently set at 1500 mg of sodium for adults. On the other hand, the Dietary Guidelines that were in effect at the time the data were collected set sodium recommendations at 2400 mg (2000 DGs) and 2300 mg (2005 DGs) per day.

Here’s a different perspective on whether or not Americans are following dietary recommendations: 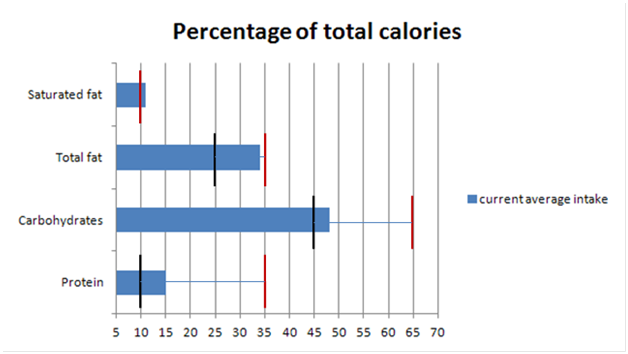 Since 1980, Americans have been told to increase their carbohydrate consumption and reduce their fat intake. Since 1980, we’ve done just that. American’s consumption patterns fall within the recommended AMDR levels, with the exception of saturated fat, which—at 11% of total calories—is just slightly more than the recommended limit of 10% of calories. (If you are interested in just exactly how well Americans have complied with the dietary recommendations of the past 30 years, you can find the gory details here.)  Far from being careless and casual consumers of anything and everything, Americans have radically shifted their eating patterns to match recommendations.

So why don’t Americans get any credit for actually lowering their fat intake and raising their carbohydrate intake, as we were told to do? I think there are a couple of things behind that.

First, I think one of the purposes of information like that presented in Figure 1 is to make sure the responsibility for overweight and obesity continues to rest squarely on the chubby little shoulders of Americans themselves and in no way reflects a possible lack of appropriateness of (or—gasp!—good scientific basis for) the Guidelines themselves. This is an attitude that pervades the Dietary Guidelines.

Second, the USDA’s Center for Nutrition Policy and Promotion would really like another $9 million to “help Americans develop eating behaviors that are more consistent with the Dietary Guidelines for Americans.” It would be a little awkward to ask for a funding increase to convince Americans to follow current dietary recommendations if we were already doing that—and they still weren’t working.

This is where recommendations become fanaticism.  According to Neil Postman, “the key to all fanatical beliefs is that they are self-confirming.”  The USDA and HHS seem unwilling to even acknowledge that the dietary shift that has occurred during the past thirty years has actually been in the direction of compliance with recommendations; in fact–according to Figure 1–they are willing to fudge the numbers to prove otherwise.  That’s not nice, and it’s sure not science.