If you are an engineer, your plan—bottom line, no fudging about—has to WORK. All. The. Time. It’s what we expect from engineers.

On the other hand, if you are a Government-Approved Nutrition Expert, your plan doesn’t have to work AT ALL. 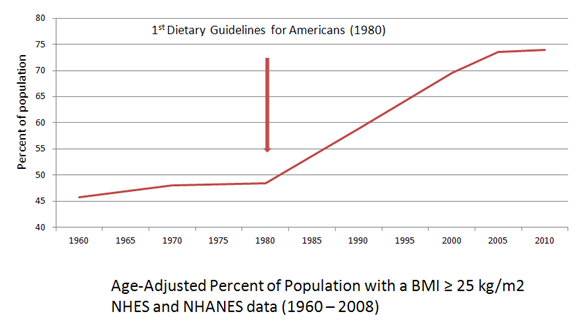 Which may be why we don’t let Nutrition Experts build bridges.

To ensure a more impressive rate of success, engineers tend to build their bridges and elevators based on a few mysterious but fundamental concepts like physics (or as we say around here, fweezix). Now, to paraphrase Barbie, I understand that physics is TOUGH. But it is also, well, insurmountably the real deal, and anything that defies the laws of physics is generally—for lack of a better word—considered to be magic.

Despite the rockin’ groove, I’m not sure that I believe in magic.

Sometimes when things aren’t working (i.e. major bridge oopie ), we get a glimpse of the realities of the physics behind the system. Let’s take a look at a category of individuals that do lose weight easily—too easily: Type 1 diabetics. A type 1 diabetic could eat 5000 calories a day, never move a muscle, and still lose weight (for the record: this is not a good thing). What happens to those calories? Why don’t they get stored as fat (hello? calories IN?) A type 1 diabetic can’t store them as fat. Why not? No insulin. Without insulin, the body cannot store energy at all. Type I diabetics must be given insulin or they literally waste away. It’s not because they try harder; it’s because of physics.

What this means is that it can’t just be the amount of calories that we are consuming, but also the source. And in the case of unnecessary carbohydrates in the diet, it’s likely to be both. The increase in caloric intake we’ve seen in the past 30 years has come almost entirely from industrialized carbohydrate food products—subsidized and endorsed by the USDA. 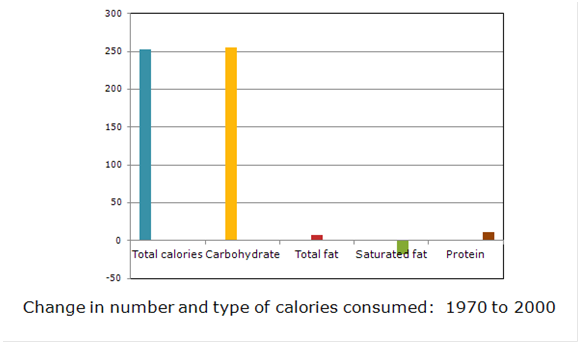 Would obesity rates have skyrocketed without the Guidelines prompting Americans to eat fewer animal products—especially meat and eggs which contain Very Scary saturated fat and cholesterol—and more whole grain cereal products? We’ll never know. But physics does tell us that carbohydrate foods have particular qualities that affect fat storage and metabolism, specifically: “A high carbohydrate meal stimulates the production of insulin. Insulin inhibits the body’s ability to use fat for energy and stimulates the uptake of fat and its storage as triacylglycerol” (Campbell & Farrell, 2009). That’s straight from my biochemistry textbook.

Now I don’t care if you eat carbs or not. Some of my best friends are carbs. But can we stop pretending that somehow—magically—there’s no relationship between the two figures above?

Apparently we can’t. According to many Nutrition Experts, including Marion Nestle, our low-fat Dietary Guidelines can be blamed only in that they do not do more to “address caloric intake, portion size, inactivity, and other contributors to obesity” (Woolf & Nestle, 2008). Notice that “caloric intake,” “portion size” and “inactivity” are all things that are our fault—in contrast to a diet recommendation of mostly carbohydrates, something the USDA and HHS are responsible for. In other words, if chubby little Americans can’t “achieve energy balance” by eating less and exercising more, it’s not because the Guidelines aren’t helping us, it’s because we are simply not trying hard enough.

(True Confession: I mostly just wanted to draw that cartoon.)

Should we reduce our calories? Maybe not a bad idea for some folks.

What kind of calories should we reduce? Ask an engineer. Unless you believe in magic . . .