Calories are the Radical Terrorist Plot of food. We don’t really know what they are, where they are, or how to successfully avoid them, but they affect all aspects of our lives: how much we eat, how often we exercise, whether or not we feel good about ourselves (our notions of “good” and “bad” behavior frequently revolve around how many calories we’ve avoided/consumed/burned/sat on). Like the Radical Terrorist Plot thing, sometimes it means our lives can get a little weird.

We do know one thing about calories though. According to Marion Nestle,
“. . . many people in the world are consuming more calories than they need and becoming overweight and obese.” Simply put, we’re fat because we eat TOO MANY CALORIES—whatever that means. 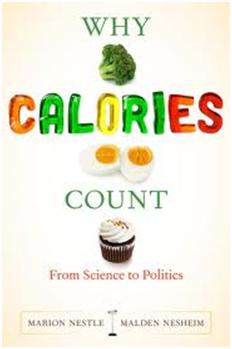 So—exactly why do calories count?

Luckily, Nutrition Expert Marion Nestle has now written a whole big book to help us understand the mysteries of calories. She very thoughtfully posted an interview of herself being interviewed about the book on her website so we could all see what she thought about her own book. But she’s such a smart person, being a Nutrition Expert and all, I was concerned that some folks would have trouble figuring out exactly what she was saying. I hope this helps clarify things.

Calories count because they are easy to understand.

Marion Nestle explains that the idea behind calories is abstract but simple: “They are a measure of the energy in food and in the body . . .” This is also true. In addition, calories are a way to measure the guilt quotient (lotsa calories) and marketability (teensyweensy amounts of calories) of food, making calories an exceptionally useful concept to both food manufacturers and those working on developing an unhealthy relationship to food.

Calories—as well as guilt and marketability—in food can be determined directly by using a bomb calorimeter, which measures the exact calorie content of food by igniting and burning a dried portion of it. In case you’re wondering, this is EXACTLY how your body measures calories too!

Marion Nestle explains that “Calories measure energy to keep bodies warm, power essential body functions, move muscles, or get stored as fat.” I would add that I don’t really know what calories do either, but if you use calories to keep your body warm, I guess my hot flashes make me “da bomb (calorimeter).” [I so crack myself up]. Hey, but then wouldn’t menopause turn us all into skinny bitches instead of fat ones?

Marion Nestle explains that the reasons we haven’t been able to grasp the whole calories in-calories out thing is that “Even talking about calories is difficult. For starters, calorie counts are given in no less than five different units — calories, Calories, kilocalories, Joules, and kilojoules (along with their abbreviations cal, Cal, kcal, J, and kJ).” These concepts are so confusing to regular folks that only Nutrition Experts like Marion Nestle and Michael Pollan actually KNOW how many calories people should really be eating; the rest of the country is just guessing.

And when Americans “self report” on how many calories they eat? Well, let’s just say they are “underreporting,” shall we?

Calories count because we don’t count them.

Government-Approved Nutrition Experts—not unlike Marion Nestle—MUST make a Big Statement about the Plight of Fat Americans, oh, about every year or so (it’s in their job description). When Slender Motivated Upper-class Gainfully-employed (code name: SMUG) Americans who read the New York Times need to know why we just can’t seem to get those fat stupid Americans to stop being so fat and stupid, they can call on Nutrition Experts–not unlike Marion Nestle–who KNOW the problem is that Americans eat too many calories—whatever that means. By keeping the focus on calories in-calories out, Nutrition Experts and food writers know that they can count on Americans to continue not counting calories, just as they have not counted them for hundreds of thousands of years, thus guaranteeing job security and future book contracts all around.

Calories count because we do count them.

According to Nutrition Expert Marion Nestle, “The U.S. diet industry is worth about $60 billion a year.” Clearly, Americans are willing to shell out for just about anything if they think it will help them figure out why they can’t lose weight when they are doing everything they’ve been told to do for the past 30 years, including eating less fat, eating more carbohydrates, and exercising.

Calories count because we can’t count them.

According to Nutrition Expert Marion Nestle, you can’t see, taste, or smell calories. This means calories are like Santa Claus and the Easter Bunny. You would have no way of knowing they even exist if there weren’t a giant academic-scientific-industrial-media complex devoted to the worship of calories and keeping them alive in our hearts and minds!

Calories count because we can count them.

Fortunately, there’s an easy way to keep track of your calories even though you can’t see, taste, or smell them.

That means if I decrease my calorie intake by 500 calories a day (this where all that helpful calorie information on the side of the box of low-fat, high-fiber, individually calorie-control portion food comes in handy) and increase my activity by 500 calories a day (which I understand I can do simply through insanity, which—according to my children—should not be much of a stretch), that means that on November 10, 2012, sometime around noon, I will disappear altogether because all my calories will be gone. See how easy that is. 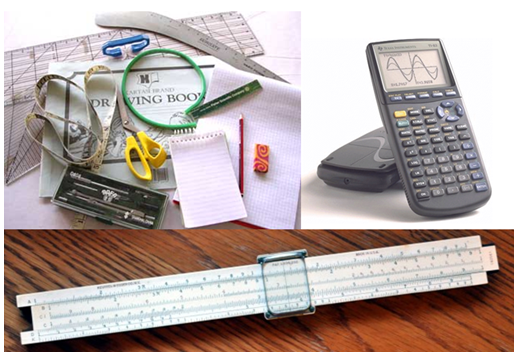 Counting calories is easy with a few simple tools.

Calories count because we should count them.

Because counting calories is sooooo easy, anybody should be able to succeed at maintaining energy balance. There are lots of ways to demonstrate to the world that YOU have the intelligence, willpower, stamina, time, money, and Fine Upstanding Moral Character to keep your calorie balance in check.

Calories count because counting calories is the only way to keep track of how many calories are in your food.


As with most other important things in life, if you can’t count it, it doesn’t count.

According to Marion Nestle, calories are derived from food. This is true of course, but only if you actually eat it. If you do decide to eat food, it’s really important to know how many calories are in your food.

This is why accurate calorie counts on everything we eat are so important! Turns out that your 500-calorie Leen Quizeen entrée may really contain—brace yourself—540 calories! With such inaccuracies in the calorie labeling of food, it’s no wonder Americans are fat.

According to Marion Nestle, this gross inaccuracy of calorie counts means that, “it works better to eat smaller portions than to try to count calories in food.” Lucky for us, food manufacturers make handy little portion-controlled packages of healthy whole grain food for us. And thoughtful Exercise Experts have given us calorie counts for every activity you can think of!

For example: An hour of coal mining equals 5 bags of 100-calorie whole grain goldfish, but since those food companies probably snuck in some extra calories in just to mess with us, if you’re coal mining for an hour, you should probably only eat 4 bags.

Calories count because they are the only thing in your food worth counting.

Marion Nestle says, “Although diets with varying proportions of fat, carbohydrate, and protein may be easier for you to stick to or be more satiating, the bottom line is that if you want to reduce your body weight, you still need to consume fewer calories.” In other words, whether or not you feel full or satisfied has nothing to do with whether or not you’ll consume fewer calories. The reason we consume too many calories is because portion sizes are bigger, soda is cheaper, TV shows are more interesting, and couches are more comfortable than ever before. Plus the intelligence, moral fiber, character, and willpower of the American people are in serious decline.

What can we do about the “calorie” problem?

According to Marion Nestle, “many groups have a stake in how calories are marketed, perceived, labeled, and promoted”—with the obvious exception of Nutrition Experts writing books about calories. They have NO dog in this fight.

Food manufacturers want Americans to eat a lot of calories, which totally explains why they sneak extra calories into our food for free without telling us.

This is why efforts to do something about obesity must focus on eating less of the foods that don’t come from food manufacturers—like eggs and meat—and focus on eating more foods that come in boxes and bags and cans that have a CALORIE count on them! Of course, Americans should also consume less soda, fast food, snacks, and other highly profitable items. That is, unless these are highly profitable items that Nutrition Experts really like! And really, it would go a long way towards solving our childhood obesity problem if we could only get calorie counts on beer for goodness sake! Darn that alcohol industry. 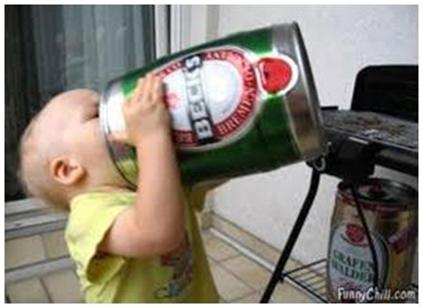 Thanks to lobbying efforts of the alcohol industry, there is no CALORIE label on this beer!

As Marion Nestle says, “On the societal level, we need measures to make it easier for people to eat less.” We need to work to change the food environment to one that makes it easier to eat healthfully, because—just between you and me—most Americans are just not willing to take charge of their own health.

Things YOU can do to “make the healthy choice the easy choice” for all those poor stupid fat people:

SMUG Americans must remember: those stupid fat people are not just fat and stupid. In the face of our “obesogenic” environment, they are helpless. You need to be the change you want to see—especially in the seat next to you on an airplane.

That right, SMUG Americans, only YOU can prevent fat people.

46 thoughts on “Why Calories Count—Fo’Shizzle”