I’ve been thinking a lot about tools lately.  This actually has nothing to with the ongoing fascinating-in-a-train-wreck-sort-of-way paleo soap opera, although I have been reading Audre Lorde’s essay “The Master’s Tools will Never Dismantle the Master’s House” and loving it.  I have all kinds of things to say about feminism and nutrition (yeah, I’m going to go there), but there are all kinds of tools and we’re going to have to talk about all of them eventually.  Today, I’ll start with the scientific kind.

At Ancestral Health Symposium 2012 there was, among other things, a great deal of discussion about what diet works “best:” primal, paleo, neopaleo (my friend Andrea invented that one), safe starch, low-carb, no-carb, etc. The reality is that, in terms of being able to make sweeping generalizations about which dietary pattern will work best for everyone, we as nutrition scientists and clinicians actually sorta suck. Other than describing very general recommendations for essential nutrition—amino acids, fatty acids, vitamins and minerals, and even these have a wide variability in individual requirements—we simply do not have the skills, the tools, or the knowledge to make sweeping dietary recommendations that do not come with the very real possibility of unintended negative consequences for an individual who might follow them.

Choline is a great example of what happens when you mix individual variation with universal recommendations:

Although our body makes some choline, we still require a dietary supply of this important nutrient.* Eggs are a primary source of dietary choline. The past 30 years of Dietary Guidelines have frightened us into reducing egg consumption and/or using egg substitutes that replace the yolk (where the choline is) with soybean oil in order to prevent heart disease, even though dietary cholesterol has little effect on serum cholesterol [1] and our average cholesterol intake is below recommended levels and has been for 40 years [2]. Nevertheless, egg yolks, a recent headline screamed, are as bad for you as cigarettes.

In response to these scare tactics, Americans have dramatically reduced their egg consumption [3]. As a result, average choline consumption does not meet current recommended standards; less than 4% of women even reach adequate intake levels [4, 5].

This is bad enough, but these adequate intake levels were based on a small study done on adult white males; standards for everyone else, including children, were extrapolated from those results [6]. Post-menopausal females, pregnant women, children, and people with certain genetic polymorphisms (which may exist in more than 50% of the population) may actually have increased needs for choline above and beyond the adequate intake level [7].

It’s hard to say exactly how large the gap between intake and actual needs are for these subpopulations, but I can hazard a guess that as long as whole eggs are discouraged as part of our diets, it will only continue to widen. The fact that dietary choline is needed for the development of  brain cells seems rather ironic in the face of such goofiness. 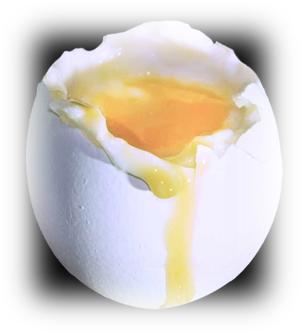 Brain food? Or death by cholesterol?

When dietary guidance shifted from being about provision of basic nutrition to prevention of chronic disease, we found ourselves using tools that were designed to examine diseases of nutrition deficiency (i.e. diseases with one fairly straightforward cause), to now make recommendations about chronic diseases with long, complex, multi-factorial origins [8]. Everyone deprived of Vitamin C will eventually develop scurvy, but not everyone who avoids cholesterol will also avoid heart disease.  Chronic diseases that result from a complex interplay between the individual and environment are difficult—if not impossible—to examine using our current tools and methods, and assessing an individual’s risk of heart disease and tailoring dietary guidance accordingly is much different from making population-wide recommendations to avoid a food–in this case, eggs–that is a primary source of an essential nutrient. 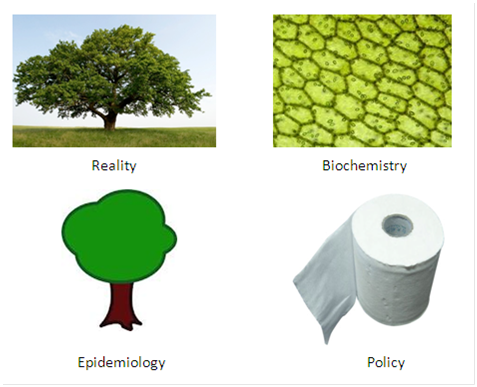 Everyone is subject to the same biochemical rules—and it’s great to learn more about how these rules work on a mechanistic level—but how those rules play out in any given individual is difficult to predict. Is there a way to use the focus of an experimental intervention without losing the environmental influences present in observational studies, and still create something that will eventually translate into meaningful policy?

Maybe. In next few posts, I take on some of the shortcomings in our current methodology and explore an approach that may help move nutrition science, and thus nutrition policy, into the 21st century.

*Choline acts as a methyl donor in pathways involving gene expression and other metabolic functions; as an important contributor to structural integrity and signaling function in cell membranes, especially those involved in nervous tissue and brain development; as a necessary constituent of lipid metabolism and transport, including VLDL required for the export of fat from the liver; and as the precursor to the neurotransmitter, acetylcholine.

4. Jensen H. Choline in the diets of the US population: NHANES, 2003-2004. The FASEB journal: official publication of the Federation of American Societies for Experimental Biology. 2007;21(Meeting Abstract Supplement):lb219.