Because never changing the recommendations means never having to say you’re sorry for 35 years of crappy advice, the 2015 (really 2016, but who’s counting?) Dietary Guidelines repeat the same old-same old “whole grains, fruitsandvegetables, low-fat/fat-free dairy, fish, nuts, and (if you must) lean meat” guidance from years past. Only difference: The new Guidelines are now oozing with vegetable oil.

In the list of recommended foods to include in “a healthy eating pattern,” “oils” now have their own category. 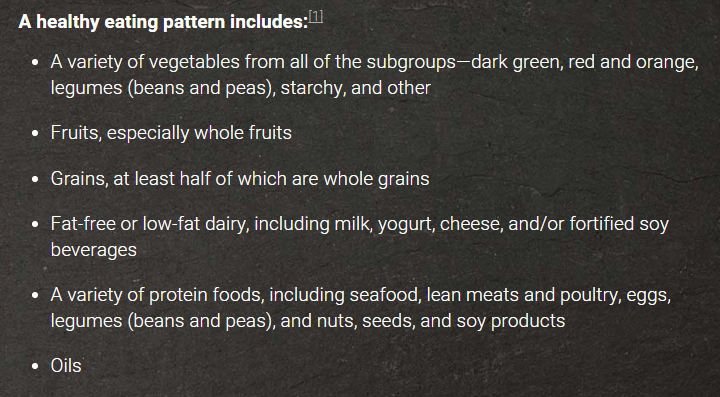 For the most part, we are talking Big Oil: canola, corn, peanut, safflower, soybean, and sunflower. Oils that have been chemically extracted, de-gummed, bleached, and deodorized (y’know, stuff you do to dirty diapers). And good luck finding them at your local farmers market.

Big Oil is big business for the U.S. agricultural economy and for the nutrition science academic industry. Alice Lichtenstein, of the 2015 Dietary Guidelines Advisory Committee, has found more creative ways to feed all kinds of oil to hamsters, rats, and people than probably anybody on earth. Corn, canola, soybean, safflower, sunflower, margarine and shortening, even rice bran oil–you name the oily food substance and Alice Slicktenstein has built her career on getting funding for studying it. Most of her work is done at–and funded through–the Jean Mayer USDA Human Nutrition Research Center on Aging at Tufts, which is supported by money from, you guessed it, the USDA.  Her research is also supported by numerous grants from the NIH branch of HHS. However, this has nothing to do with the shiny new prominence of oily stuff in the USDA’s and HHS’s new Dietary Guidelines.

To be sure, oil oil everywhere is not the only thing slick about the new Guidelines. The language is pretty slippery too. There’s been a lot of cheering from the press about the “new” direction of the Guidelines, and indeed, some of the things being reported are actually in the Guidelines: The Guidelines have gotten rid of the ridiculous (and possibly dangerous) “1/2 teaspoon of salt a day” limits on sodium for some subpopulations–although the no-more-than 2300 mg (yes, a Whole Teaspoon!) limit should still be–wait for it–taken with a grain of salt.

Despite all arguments otherwise, nutrition–the politics and the science of it–is complicated. In a number of cases, trying to make the ugly stepsister foot of a “consistent public health message” squeeze into the glass slipper of inadequate and contradictory science has the Guidelines talking out of both sides of its oleaginous mouth. Here’s a closer look at what is going on:

“individuals should eat as little dietary cholesterol as possible”

What’s fun about this is that the Vegamanics are celebrating this as “cholesterol still sucks” while the SatFat Redeemers are all about “Eat them eggs, y’all.” They’re both right.  Or wrong.  Hey, this is nutrition! You don’t really expect a straight answer now, do you?

It’s true that [lean] meat has not disappeared altogether, and that language about a “sustainable diet” (whatever that means) is not in the Guidelines. At the same time, the Guidelines recommend “lower intakes of meats, including processed meats,” lumping them in the same category as sugar-sweetened food and refined grains. So like the cholesterol issue above, this is getting played as “Evil meat lobby wins” on one side of the debate, and “Meat justice prevails” on the other.

3. Limits on fat are gone.
Nope. Limits on “fat” are still there. If you’ve been hearing rumors that we are at the end of the “low-fat” era, and you thought that meant that the Guidelines were going to give the green light to fats–natural fats, fats that you could find at your local farmers market–you would be sadly, profoundly mistaken.

So: Fat–as in “saturated fat”– is still evil. For adults, lower limits on “oil” are still 20%–with the exception of a few oils that the DGA folks still don’t like because their fatty acids are mostly saturated. And the upper limit on dietary “oil” as a macronutrient remains at 35% of calories, as it has been since 2005. Only by keeping limits on “oil” low can we manage to cram in the Guidelines’ requisite 45%-65% of calories of carbohydrate into our diets and still have room for protein.

In other words, the USDA hasn’t discarded the “low-fat” diet. They’ve instituted the “low oil” diet. Now you are allowed a whopping 27 grams (about 5 teaspoons) of highly processed and refined, probably not local or within your foodshed, oily oil. Cheers!

4. The DGA limits sugar intake.
Nope. It limits “added sugar” intake. That means that a bottle of orange juice, which “naturally” has as much sugar as a bottle of soda, is “good,” while soda is “bad.” Yeah yeah yeah. I hear you out there: “But but but. Orange juice has Vitamin C.” So add some Vitamin C to soda–same difference. Puh-leeze. Sugar is sugar. (I’ll save my “starch is sugar too” rant for another day.)

And all this talk about how Americans “typically exceed” recommendations for added sugar intake? Go look through the past 35 years of Dietary Guidelines. This is the first time ever that there has been an official numerical limit on sugar in any form–added or otherwise. I’m not sure how we could “exceed” something that wasn’t defined in the first place. However, the “Americans don’t follow the Guidelines” story is the best way to avoid confronting the fact that the Guidelines have not worked as intended. USDA/HHS can pretend that all would have been well if those fat stupid Americans had just done the stuff they were (actually not) told to do! Secretary Burwell suggested at the hearings in October that without the Guidelines the rapid rise in obesity rates might have been even rapider …

“We are on the wrong trajectory, but would the trajectory have been worse?”

… though it is hard to see how.  Fat lazy Americans can only cram so many Double Whoppers with Cheese down their gullets at a time, and besides Netflix wasn’t even invented until, like, 1997.

For a bit of perspective, although the 10% cap on “added sugars” is being hailed as some nutrition revolution, the USDA says Americans typically consume 13% of their calories from “added sugars” now. The radical new cap on “added sugars” heralds a (potential) whopping 3% decline in their consumption.  To be replaced by “naturally occurring sugars”? Or possibly more artificial sweeteners? Maybe, beer?

One thing is true about the Guidelines, though. Pretty much everyone hates them. Doesn’t matter where on the nutrition dogma spectrum you look–Marion Nestle or Nina Teicholz–everyone’s complaining.

I don’t like them either, but for reasons I don’t hear about in the press:

“All segments of society—individuals, families, communities, businesses and industries, organizations, governments, and others—can and should “align with the Dietary Guidelines.”

What this means:  The Guidelines have not worked as intended in the past and haven’t changed significantly in this edition, but this isn’t because the whole idea of having a single dietary prescription that will reduce risk of virtually every chronic disease in all Americans no matter their race, gender, age, genetics, lifestyle, etc. etc. etc. is patently ludicrous.  The Guidelines haven’t worked because we haven’t “aligned with” them.

As some snarky person once said, this is all about enforcing your right to eat what the folks behind the Guidelines have determined is good for you.

“Aligning with the Dietary Guidelines by taking these actions is powerful because it can help change social norms and values and ultimately support a new prevention and healthy lifestyle paradigm that will benefit the U.S. population today as well as future generations.”

What this means:  Making certain behaviors the “norm” through public health dictum is a tried-and-true way for privileged classes to impose their values on the less-privileged.  “Aligning with” the Guidelines will help make eating (and exercising) like rich white people the morally superior choice for everyone.

To paraphrase how one brainless “expert” on public consumption put it many years ago, “Let them eat kale!”

For the rest of us, well, Marion Nestle is right when she says that the Guidelines are a “win” for the processed food industries.  She should know.  She was managing editor of the 1988 Surgeon General’s  Report on Nutrition and Health, which said that processed food created to fit the prevailing definition of “healthy” is exactly what the public needs:

The 2015-20120 Dietary Guidelines continue this line of reasoning:

“During the past few decades, food products and menus have notably evolved in response to consumer demands and public health concerns. The food and beverage and food service sectors and settings have a unique opportunity to continue to evolve and better align with the Dietary Guidelines.”

Which means that there is one group that always LUVS the Dietary Guidelines. As Food Navigator-USA puts it:

“The 2015 Guidelines released Jan. 7 create a marketing opportunity for savvy manufacturers and industry stakeholders to promote their products through educational materials that help consumers better understand how to meet the report’s recommendations.”

“In [developing and reformulating “healthy” products], care should be taken to assess any potential unintended consequences so that as changes are made to better align with the Dietary Guidelines, undesirable changes are not introduced.”

That means when the onslaught of oily, whole-grain, artificially sweetened and flavored food products fails to improve the health of Americans or (heaven forfend!) makes things worse, we know who to blame.

They’re too slick for that.

PS.  I do plan on continuing the conversation started by Jennifer Calihan’s guest post “Low Fat, High Maintenance:  How money buys lean and healthy–plus an alternative path to both.”  If you haven’t read it already, you should (and the comments–good stuff there too). But, I just gotta get a couple of Dietary Guidelines rants out of my system.