Well. This is awkward.

A big scoop blows the cover on how, back in the 1960s, some gullible Harvard researchers were funded by the Evil Sugar Industry to make sure that fat (and not sugar) took the fall as the cause of all of America’s problems, including the cancellation of Lost in Space.

One of those aforementioned oh-so-easily-corrupted scientists was none  other than Mark Hegsted, the mastermind behind the McGovern’s Dietary Goals (okay, the mastermind behind the Machiavegiann, Nick Mottern, who actually wrote the 1977 Dietary Goals¹), and, as we all know by now, this set the whole nation down the path to mainlining sugar whilst shunning perfectly good food like pork ribs.

So the scene is this:  Mark Hegsted (and his co-authors, McGandy and Stare) are sitting around their labs at Harvard, minding their own beeswax, fillin’ up test tubes, and lookin’ through microscopes.  Y’know, doin’ science.  Along comes Evil Sugar, waving big fat stacks of green under their noses.  Suddenly, Hegsted and company are payola zombies, mindlessly extolling the virtues of sucrose.

One of the reasons I love my life is I get to teach a class called “Introduction to Science, Technology, and Society” to a bunch of bright-eyed, smart, and exceptionally polite undergraduates at North Carolina State University.  Last week we did an activity to help them get a feel for the ways in which science is a social process.  One of the things we talked about were “interests,” including funding,  but we also discussed the fact that “follow the money” is almost always an inadequate explanation for how and what knowledge gets created in science.  My students figured out pretty quickly that scientists have multiple interests, biases, concerns, and limitations–and that these all compete for a place in the process of transforming bits of reality into the “facts” that are the outcomes of scientific knowledge production.

“Evil Sugar Corrupts Scientists” is an attention-grabbing headline, but the historical picture is a bit muddier.

Inconvenient historical moment part 1:  Let’s start with the fact that in 1965, Hegsted, McGandy, and Stare (and a nutrition instructor named Myers) published a paper entitled, “Quantitative Effects of Dietary Fat on Serum Cholesterol in Man.”²  In this article, the researchers–who used fats and oils supplied by Proctor & Gamble and milk and ice cream supplied by the Hood Milk Company–developed something that would come to be known as the Hegsted equation, which predicts the relationship between fats in the diet and serum cholesterol.  That they tested these fats and oils by incorporating them into “waffles, muffins, cakes, cookies, pie crust, biscuits, salad dressings, and spreads for bread” was beside the point; their focus of concern was fats in the diet and serum cholesterol. [Let me briefly remind you that part of the rationale behind their experiment was to contradict the conclusion stated by Ancel Keys a decade earlier, that dietary cholesterol does not have an effect on serum cholesterol.]

So, in 1967, when this same group of researchers (minus Myers) publishes a review entitled, “Dietary Fats, Carbohydrates, and Atherosclerotic Vascular Disease,” we already know which macronutrient they think is the most important contributor to heart disease, and we already know that they are more concerned about serum cholesterol than any other biomarker.  My guess is that the Evil Sugar Industry knew this as well, and that’s why this group of researchers was asked to write a review.  Most of the review consists of summarizing studies where dietary carbohydrate is held constant while the type of carbohydrate–sucrose, glucose, starch, etc.–was varied.  It’s not a big surprise to me, and it shouldn’t be to you, that they found, in most cases, sugar didn’t have a much different impact on total cholesterol than starches or other sugars. In a few cases, sugar/sucrose is found to increase triglycerides–and they duly note this.  This is Rhetoric of Science 101:  Determined critics can poke holes in any experimental system or rationale; those same scientists can find sound reasons to justify their own methods and thinking.   They don’t (necessarily) need funding from an involved industry to be motivated to do this.

Hegsted and company’s unsurprising conclusion is this:

“The major evidence today suggests only one avenue by which diet may affect the development and progression of atherosclerosis.  This is by influencing the levels of serum lipids, especially serum cholesterol …”

This is also a conclusion which would render the Hegsted equation central to determining what constitutes a healthy diet. How ’bout that?

They go on to add that limited evidence demonstrates a “slightly significant role for the kind and amount of dietary carbohydrate” in the regulation of serum lipids, the effects of which are “more pronounced when diets low in fat are consumed.”   From their perspective, they don’t think dietary carbohydrate is worth talking about, except in the context of a low-fat diet. And, if you read their 1965 paper, you already know that Hegsted and co. think type of fat is more important than overall amount because that’s where they said, “Dietary advice to lower the total fat intake is likely to be self-defeating.”

They end with this:

“Since diets low in fat and high in sugar are rarely taken, we conclude that the practical significance of differences in dietary carbohydrate is minimal in comparison to those related to dietary fat and cholesterol” (emphasis mine).

From their perspective, a diet low in fat does not imply a diet high in sugar. The most commonly used sugars at that time were cane and beet–complicated politics kept prices fairly high–and corn syrup had not yet achieved widespread use. 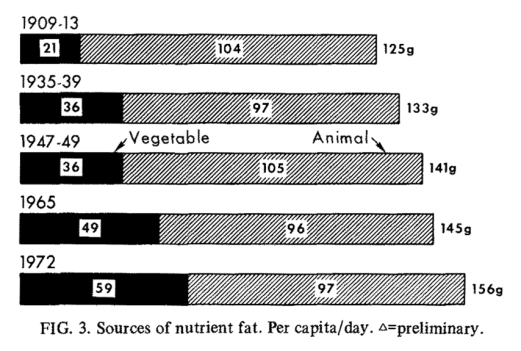 Both figures above are from the 1977 Dietary Goals for Americans. Which brings us to …

Inconvenient historical moment part 2: Yes, Hegsted was the scientist who was the primary supporter of McGovern’s 1977 Goals.  That much is true.   So let’s chase that lead.  In the first edition of the 1977 Goals, Goal Number 5 said: “Reduce sugar consumption by about 40 percent to account for about 15 percent of total energy intake.”   This doesn’t sound like the work of someone in cahoots with Evil Sugar. 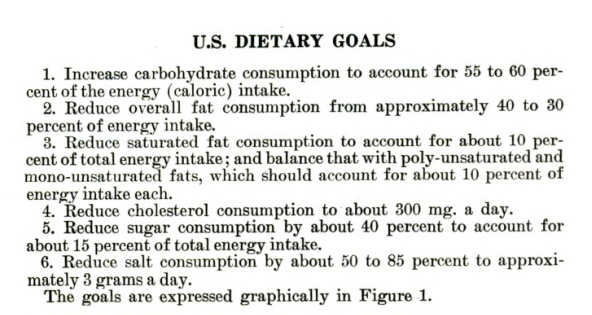 But wait, there’s more!  In the second edition of the 1977 Dietary Goals (the one where Michael Pollan whines about the meat people bullying the committee into revising the “reduce meat” statement to say “reduce saturated fat”), the “decrease sugar” goal has been moved up to Goal Number 3 and says, “Reduce the consumption of refined and processed sugars by about 45 percent to account for about 10 percent of total energy intake.”

This was still on Hegsted’s watch.  How do we reconcile the increase in sugar restrictions with this (particular) conspiracy theory?

Aside from anachronistic analyses and inconsistencies that can’t be explained simply by pointing to a funding source, the current media spin on the Hegsted/Evil Sugar story suggests some pretty problematic assumptions:

My students know better.  I know this because all of the comments just above came from them when I asked them if they could think of any problems with the way the issue was being characterized in the media.  Folks feeding the media frenzy should know better too.

Blaming Big Food money for everything that is wrong with nutrition science and policy suggests it was all was just-fine-thank-you until Big Food came along and messed it up.

One of the problems with this view is that it encourages us to believe there is no such thing as ideological (or other) biases in science, just money.  So when Walter Willett calls research that contradicts his own “a pile of rubbish,” are we to assume that his belief that even the slightest bit of weight gain will cause you to die badly is the result of his being secretly funded by Jenny Craig?  After all, the “pile of rubbish” research (which suggests that maybe overweight and even obesity are not so horrible) was funded by the government.

And, in the current media framework, government funding is without bias, just ask the mustachioed man himself:

“Most contemporary researchers, including Willett, also acknowledge that publicly funded studies are preferable. ‘Ideally, all research would be publicly funded, so there would not be any conflict of interest,’ he says.”

Pointing the finger at Big Food money to explain away the problems in nutrition science and policy posits a particularly wild assumption:  government funding = no conflict of interest. But, as Marion Nestle’s favorite diversionary tactic, it does work to steer the conversation away from how the federal government funded plenty of its own reviews that emphasized fat and dismissed the involvement of sugar in the development of heart disease.  Nestle worked on one herself.³

Blaming the involvement of Big Food money for flaws in the scientific process is the same as blaming Big Food for obesity.  They are both simply indirect ways of blaming individuals for their bad behavior:  When Evil Sugar waved that bag of money under Hegsted’s nose, he didn’t have to take it, now did he?

Should anyone think I’ve gone off the deep end–I did just finish my written exams, so this is a distinct possibility–I’m not defending the sugar industry.  I am, however, defending the reputation of Mark Hegsted.

Why is it is that, on the one hand, we insist on characterizing nutrition science as unquestionably sound and definitive and nutrition scientists as inherently neutral and objective, and on the other hand, we assume that nutrition scientists will sell every bit of their scientific integrity to the highest bidder at the drop of a bundle of cash and create fishy science–which no one finds the least bit fishy until we hear about this transaction?

If we are willing to accept a more nuanced view, we might consider this:

Government is as “interested” in particular outcomes from science as is any corporation. They provide support for preferred views in terms of funding as well as other resources that corporations don’t necessarily have, such as public platforms, training, positions of authority, and access to important information or policymakers. Government funders back nutrition scientists who reliably produce results they like–but that’s a conversation Marion Nestle doesn’t want to have.

For their part, scientists are human and biased in ways that can’t always be accounted for by–and that might be more powerful than–funding.  Nutrition science, in particular, is full of a priori reasoning and lousy methodology propped up only by time and reputation–but that’s a conversation Walter Willett doesn’t want to have.

The field of nutrition science is massively overrun with weak associations, contradictory results, and experiments that incorporate preconceived notions about the relationships between food and health into the methods used to test those relationships.  Instead of positioning Hegsted and his fellow investigators as dupes of Evil Sugar who then pulled the strings that poisoned America, we might ask why Willett and Nestle want to make sure that problems in nutrition science and policy are framed by a narrative that excludes their part in them.

48 thoughts on “Sugar and Spite: Mark Hegsted and the Great Sugar Conspiracy”